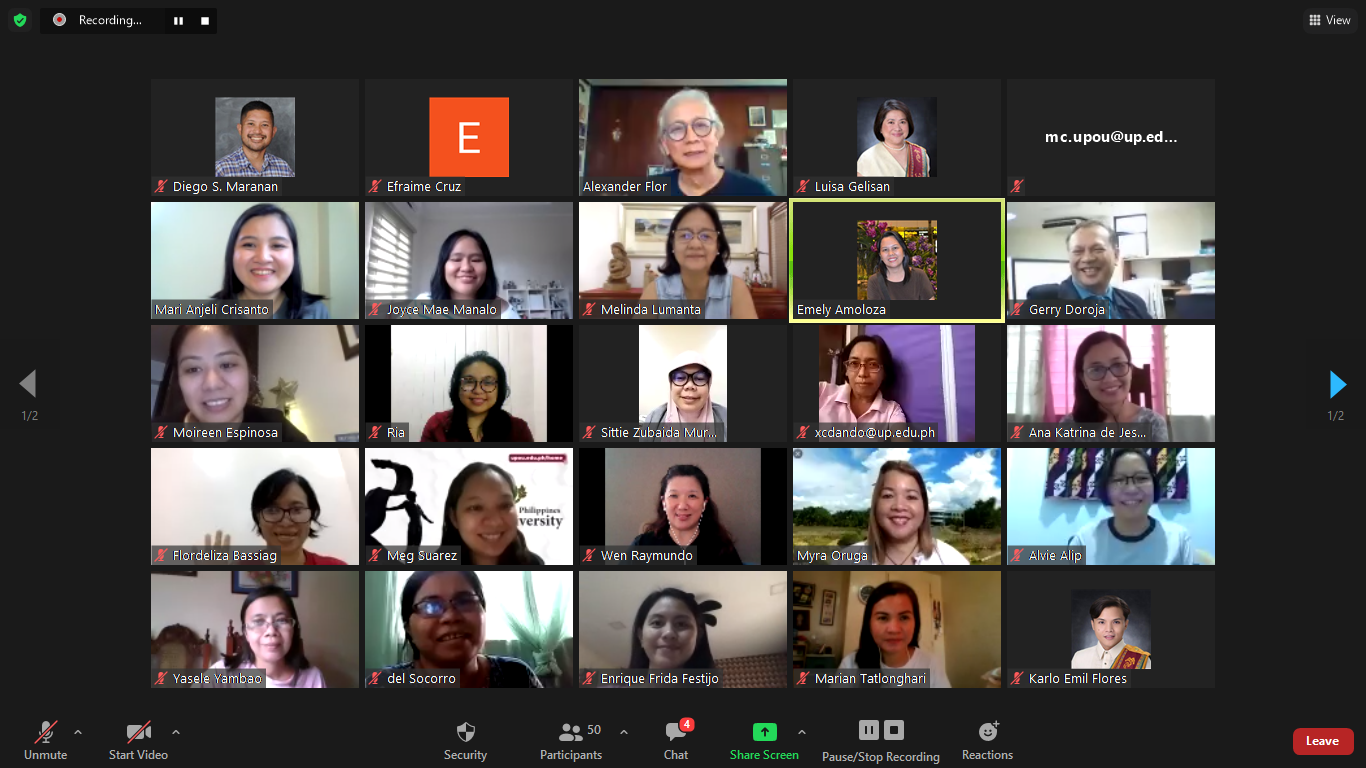 Professor and Dean of FICS, Dr. Alexander G. Flor, opened the discussion by deconstructing and reframing the term “university of the future”. He asserted that if we want to define the “university of the future”, we have to first determine what “the future” refers to. He argued that everyone, including the institutions that the attendees belong to, is in a state of moving and evolving towards a better state, greater things, or perfection; which he calls “the future”. He specifically pointed out that the university evolves to a bigger and greater thing by learning from mistakes and adjusting to its environment. “Future to me is any point in time when we are in a better state than we are right now”, he stated.

He then proceeded by asking, “How do we define this state of moving towards perfection?” To address the question, he explored the word “university”, which is related to the ideology of universalism. He arrived with certain attributes of universalism, which includes a) transcendence or going beyond the normal and physical, b) agility or the ability to reposition oneself effectively, and c) openness or willingness to adapt any methods for one’s improvement. He expounded how the university, particularly UPOU, possesses these attributes by transcending time and space through its mode of learning (transcendence), adjusting to the environment despite the occurrence of pandemic or not (agility), and by not only providing distance education but also being open in adapting other pedagogies, curricula, assessment and disciplinarity (openness).

Dr. Flor then shifted in explicating information and communication as a pandiscipline. To do this, he used storytelling through reverse timeline. Some of the interesting discoveries on a given timeline he shared are a) the origin of one of the most frequently used word this year (2020), Social Distance, which is a not a medical but a communication term, b) the introduction of 2019’s Information Theory of Aging, c) the process — how he and his colleague’s come up with the assertion that development is a communication process in 1988, and d) 1976’s introduction of meme and its viral properties.

“There’s much more to it [information and communication] than what meets the eye,” he concluded while highlighting the value of information and communication, “and this is what we’re trying to unravel here at FICS.” “It is a pandiscipline that covers every discipline I know from physics, mathematics and biology,” Dr. Flor remarked in hopes that the stories he shared could be further tackled or challenged by the following speakers.

Assistant Professor Dr. Diego Maranan, discussed his presentation entitled “Future Disciplines, Future Practices”. Starting with a preamble or pahabol, he clarified that university of the future means aspirational vision for learning, teaching and research in the future; different from “future of the universities”, which is the actual probable state of university in a given time beyond the present. He supposed that the university of the future will be interdisciplinary or multidisciplinary; while the future of universities will become more distributed, actively involved in embedding students with industry training through partnerships and inter-collaborations of universities globally. He additionally cited some predictions for higher education future which includes a) the challenging opening of colleges and universities, b) revenues going down but costs waying up, c) colleges maintaining a major online presence, d) massive online competition and consolidation, and e) emergence of new ubiquitous learning platforms, among others.

Having disciplinal training from computing science, performance and installation arts, dance and body studies, virtual ethnography, and  technology design, Dr. Maranan also shared a few of his views on the future of disciplines centered around information and communication. These comprise a) inclusion of cognitive sciences, b) the body as a source of knowledge; c) reinforcing the importance of arts, humanities and philosophies in the sciences, d) decolonization of disciplines: indigenous, queer, non-binary and non-Western perspectives, e) thinking in systems: complex, dynamic, adaptive, emergent, and f) deep time and deep history or thinking in terms of centuries and millennium also known as the long-now instead of the short now.

One of his notable remarks during the discussion centered on emphasizing the value of arts, humanities and philosophies in sciences,“The fundamental discoveries in science required creative thinking. My assertion is that a culture and society that values arts, humanities and philosophies [which] has legitimate forms of knowledge inquiry is also the kind of society that will create radical paradigm shifting discoveries.”

The last panel speaker, FICS Faculty Secretary, Asst. Prof. Joyce Mae Manalo, began with a disclaimer that she is not a fan of thinking about the future, but she is fascinated with trends in the discipline. She explained Roger’s Theory of Innovation and enumerates key persons involved in the innovation process: the innovators, early adopters, early majority, late majority and laggards. As a critical thinker, she encouraged the audience to ponder on the questions “Who is driving the innovation?” and “Who is going to shape the university of the future?”  In terms of analyzing trends, she challenged the audience to identify the forces that cause changes in the university, also known as “the movers and shakers of the academics disciplines”. From this, she arrived at another tough question: “Are we the innovators?”  and “What are we bringing to the table to shape the future?”

Asst. Prof. Manalo further expounded that adopting and adapting are necessary for the university to survive: adopting the current technologies and adapting to inevitable changes. She also raised the importance of our awareness and standards with regards to what the university adopts (e.g. curricula from other sources).

As she said, “We can think of the future as a series and cycles of trends, things that come and go. It’s a flux but pretty uncertain for university to survive, we should be able to adopt and adapt.”

During the open forum, the audience expressed various questions ranging from the possibility of making the arts and science co-equal, the idea of meta-university, and the feasibility of partnering with all the other universities to harmonize education, among others. Dr. Flor expressed his pride for the other two panelists, who are both FICS faculty members, for their substantial lecture. The final part of the event was the declaration of the FICS Manifesto by the participants led by Dr. Flor.

Ms. Mari Anjeli Crisanto, Assistant Professor of FICS and focal person for FICS Quality Assurance, served as the event’s moderator. An audience thanked the persons involved in organizing the event as she sees the significance of the inputs to our universities in the future.

IN PHOTOS: UP Open University (UPOU) holds a Send-off Tribute to the outgoing University of the Philippines President, Danilo L. Concepcion today, 3 February 2023. Before the program started, a ribbon-cutting ceremony was held for the soft inauguration of the UPOU Multimedia Production Center. The event was also attended by UP Vice President for Development, Dr. Elvira A. Zamora, UP Vice President for Public Affairs, Dr. Elena E. Pernia, Atty. Gaby Concepcion, UPOU officials, faculty, and staff.#UPOpenUniversity #salamatpdlc ... See MoreSee Less

The UP Open University (UPOU) Office of the Vice C

The UPOU Faculty of Education is looking for two (

In celebration of the 25th MPM Anniversary, the MP

UP Open University (UPOU) wishes everyone a warm a

The UP Open University (UPOU) holds a hybrid Oath-

IN PHOTOS: The UP Open University (UPOU) held an i

The UPOU Office of the Vice Chancellor for Academic Affairs (OVCAA) is looking for a Project Staff.

The UPOU FEd is looking for two (2) Project Staff.

Interested and qualified applicants may submit their application on or before 11 January 2023 at the Faculty of Education, TLH Building, UPOU Headquarters, Los Baños, Laguna or email at [email protected]

In celebration of the 25th MPM Anniversary, the MPM will recognize three (3) alumni achievers.