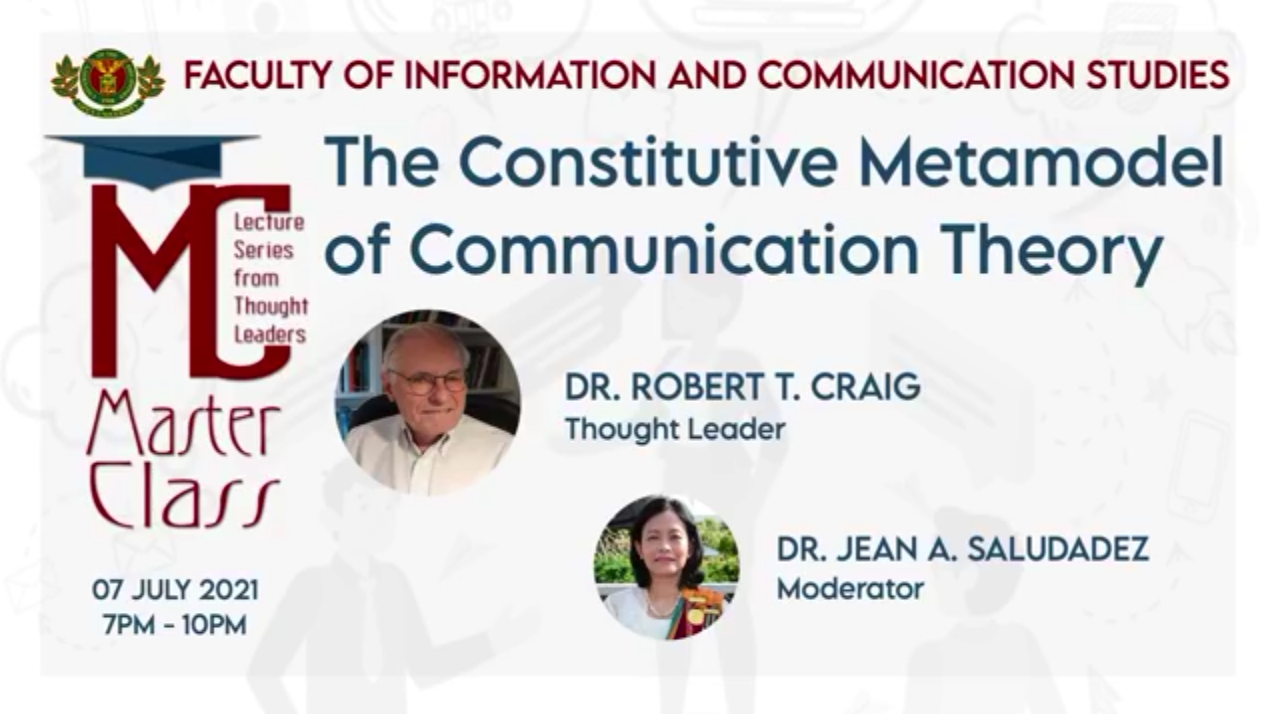 The UP Open University (UPOU) Faculty of Information and Communication Studies (FICS) conducted a Masterclass entitled “The Constitutive Metamodel of Communication Theory” featuring Dr. Robert T. Craig, a renowned author, speaker and the proponent of seven communication traditions, as its thought leader. This session of Masterclass was especially dedicated to the FICS Masterclass Pioneer, Thought Leader and Adviser, Dr. Felix Librero.

The event’s emcee, FICS University Extension Associate, Ms. Emely Amoloza, shared her experience in inviting Dr. Craig to be the resource speaker, considering that all communication students only know him through the books and articles he has written. She regards getting a yes from him as a significant accomplishment and hopes that this session would produce good results for all the participants.

Mr. Jerry Donato, Masterclass co-proponent and a current Doctor of Communication (DComm) student, gave a brief introduction about the lecture series. He stated that “Masterclass is a series of lectures given by experts and academics from the fields of communication…which thrives in spontaneous exchange of ideas from the thought leader to the participants. It intends to preserve and capture the knowledge of thought leaders for future usage and reference.” This is followed by a welcome message  from Dr. Alexander G. Flor, Dean and Professor of FICS. He acknowledged the different affiliations of participants, which according to him represents “diversity of thoughts and maturity of perspectives.” He also introduced the event’s moderator, Dr. Jean A. Saludadez, a thought leader and UPOU’s Vice Chancellor for Finance and Administration. 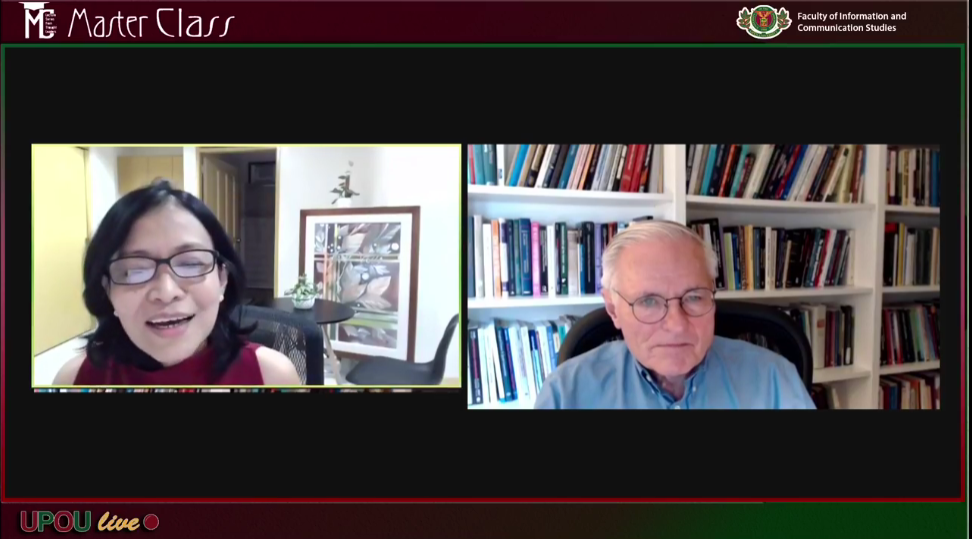 Dr. Jean A. Saludadez (L), a thought leader and UPOU’s Vice Chancellor for Finance and Administration, was the event’s moderator.

Dr. Saludadez described the affiliations of Dr. Craig, including being Professor Emeritus of Communication, Faculty Accolade of Cultural Language and Social Practice at University of Colorado Boulder, and author of several books studied by UPOU DComm students, among others. She recognized that Dcomm students deem Dr. Craig as a celebrity and meeting him virtually for this event is a dream come true for them.

Dr. Craig thanked everyone involved in the event and expressed delight for being invited in the event. He began the talk by defining what a metamodel is. According to him, “A metamodel is a model of models, an attempt to characterize or understand the different models of communication and how they relate to each other in a common field of knowledge without attempting to make a unified theory to replace those theories but rather to make use of what value they have for us.” He proceeded by providing a brief background on where the field of communication theory came from. He acknowledged that although communication theory draws both on ancient and modern intellectual traditions, it is still new and not well-defined.

He traced how “communication” became a topic of growing interest and concern in society since  the early 20th century. This is evident in the following areas:  a) concerns about organization and social change, emerging economy, cultural and political effects of mass media, b) development of new professions and industries (e.g. advertising, public relations, radio), c) “better communication” becoming the answer to social problems and key to personal success and happiness, d) growing academic interests: theories appearing in sociology, psychology, philosophy, linguistic, but there’s still a lack of concept about “communication theory”, e) communication theory becoming a field of engineering in 1930s-1940s, f) emergence of academic discipline of communication, and g) “communication theory” expanding to social psychology, media theory, semiotics, rhetoric, etc. – a multi-disciplinary collection of ideas, not a unified field. He goes on to say that communication was a problem and practice in society before it was a field of academic theory.

Dr. Craig further argued that the Constitutive Metamodel (CM) is a model for the field of communication theory with a call to improve and to “cultivate the social practice of communication.” He detailed the assumptions of CM which are: a) Communication is a culturally-shaped concept and social practice constituted in the metadiscourse that circulates in society; b) Communication theory is a form of discourse that can influence ordinary metadiscourse and practice; c) Theories can be useful for framing and reflecting practical problems but only as they are relevant to the practice; d) Theories are relevant insofar as they are both plausible (reflect commonplace cultural beliefs about communication) and interesting (somehow informative or challenging to common beliefs); and, e) Several intellectual traditions of communication theory can be distinguished, each of which is relevant to a certain range of problems and practices.

Dr. Craig emphasized that the goal of communication theory is a dialogical-dialectical coherence. “We need a common awareness of many theories that provide alternative, practically consequential ways of framing communication problems,” he remarked. He differentiated  dialogical from the word “dialogue” means openness to all views while dialogical means clash of views, having debate, not empty disagreement but exchange of ideas informed by empirical, historial, interpretive and critical research.

Next, he enumerated how the constitutive metamodel has been proven useful such as its employment as a teaching device and usage of multiple traditions to reflect on a problem, to name a few. He also discussed the critiques of the CM, which includes epistemological bias and difficulty of dialogue across traditions. He, then, explained the current trends in CM which is a multicultural dialogue with non-western traditions and detailed the steps to make this multicultural dialogue possible. He provided an example metamodel with Eastern and Western traditions namely Buddhist, Confucian, Cybernetic, and Spiritual. Additionally, he described the overview of the book entitled “Practicing Communication Theory: Exploring, Applying, and Teaching the Constitutive Metamodel.”

After the talk, Dr. Saludadez and Dr. Flor gave their responses to Dr. Craig’s lecture. This is followed by the open forum facilitated by Dr. Saludadez. Questions range from the process on how Dr. Craig came up with seven traditions of communication, the evolution of CM through the years, and the use of grounded practical theory, among others. Some participants in the zoom platform eagerly asked live questions while expressing their admiration and gratitude to Dr. Craig. Considering the positive feedback from participants, the FICS is looking forward to another fruitful future lecture series with Dr. Craig.

This message is only visible to admins.
Problem displaying Facebook posts. Backup cache in use.
Click to show error
Error: Error validating access token: The user has not authorized application 1332798716823516. Type: OAuthException

UP Open University (UPOU) joins the country in mou

We are inviting everyone to join us in "A Forum on

All UP Open University (UPOU) online sites will un

UP Open University (UPOU) invites you to join the

For the University of the Philippines Open Univers

The UP Open University (UPOU) Office of Gender Con

The UP Open University (UPOU) Office of Public Aff

Calling all UP Open University (UPOU) Alumni! The

History in the making as we recognize the awardees

Are you excited for the first ever UPOU Alumni Congress 2021?! Come and join us at the Opening Program and attend Faculty Workshops on 30-31 July 2021 via Zoom. Visit our social media pages to register for the programs!