The University of the Philippines Open University (UPOU) Faculty of Information and Communications Studies (FICS) held its recognition program for the graduating class of A.Y. 2021-2022 on 10 December 2022 at the CCDL Auditorium, UPOU HQ. A total of 121 graduates were recognized. 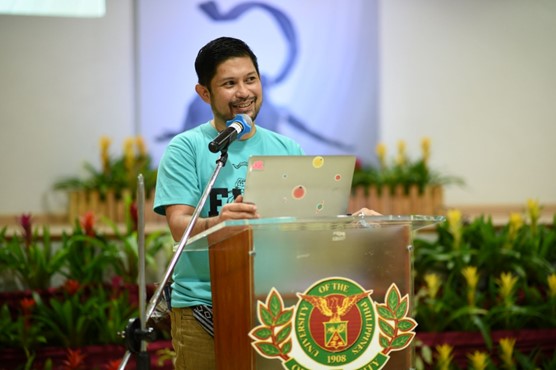 An inspirational message was given by the FICS Top Graduate of Class 2021, Dr. Lorena Bañares, who is currently teaching at RMIT University in Hanoi Vietnam under the school of communication and design. Through a video recording, she presented a slew of possibilities in terms of what could be the next steps for the graduates. At the same time, she challenged them to raise the bar of excellence by reimagining, reconfiguring, and realizing possibilities responsibly.

FICS then honored all graduates, with Dean Maranan and the respective Program Chairs awarding their certificates of completion: Dr. Emely Amoloza for the Bachelor of Arts in Multimedia Studies (BAMS) program, Asst. Prof. Mari Crisanto for the Diploma in Computer Science (DCS) program, Dr. Benjamina Paula Flor for the Master of Development Communication (MDC) program, Dr. Roberto Figueroa, Jr. for the Master of Information Systems (MIS) program, and Dr. Alexander Flor for the Doctor of Communication (DCOMM) program.

The awarding of certificates of completion was then followed by the Pahinungod Volunteer Pinning Ceremony. Pahinungod Director Queenie Ridulme and Chancellor Melinda dP. Bandalaria awarded pins and tokens to FICS graduates who served as volunteers in their public service activities.

The top graduates per program were also recognized. Dean Maranan and the respective Program Chairs awarded the following graduates with certificates of excellence and medals: 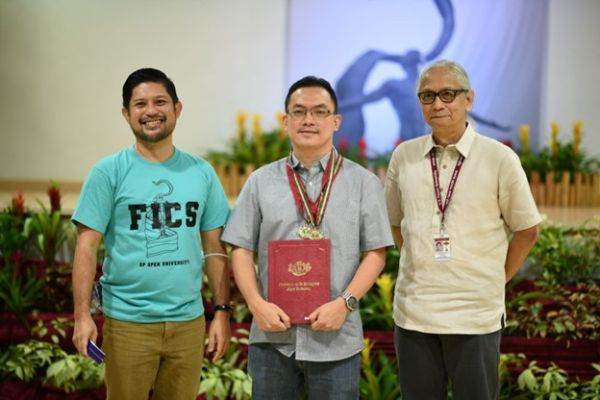 As the FICS Top Graduate of Class 2022, John N. Ponsaran also gave a message. He shared his thoughts on critical interdisciplinarity and solidarity. He emphasized that “the illustrative case of plant communication points to the fact that indeed living organisms perform three critical functions to survive and thrive — (1) exchange of material, (2) exchange of energy, and (3) exchange of information – an idea consistent with that of plant physiologist Stefano Mancuso who argued that ‘intelligence is a property of life’. And such intelligence, in its various embodiments such as the so-called ‘collective intelligence of the forest’ or human’s ‘collective cognition’, can only be accomplished through communication.”

Ponsaran added that “communication must be understood as a process that begins with the disposition and habit of being sensitive. In our personal and collective lives, this basically involves being sensitive to other individuals and groups’ unique social situatedness. The same is true in our capacity as scholars and researchers.” With this, he reiterated that one of the critical attributes of being an information and communication scholar is to be inquisitive (a corollary of being sensitive). He further stated that being inquisitive allows us to reorient our focus on themes and subthemes that are either unstudied or understudied, and even those that are not being studied anymore.

On behalf of the FICS faculty members and as is customary each year, Dr. Benjamina Paula Flor gave a heartfelt celebratory message to the graduates. This was followed by another FICS tradition, a toast to the graduates, which was originally initiated by former FICS Dean and current UPOU Chancellor Dr. Melinda Bandalaria. This year, it was led by Dr. Alexander Flor. The program was capped off by the singing of the UP Hymn, UP Naming Mahal.

After the recognition program, a short UPOU alumni meeting was held for the election of new officers. The following graduates were appointed:

IN PHOTOS: UP Open University (UPOU) holds a Send-off Tribute to the outgoing University of the Philippines President, Danilo L. Concepcion today, 3 February 2023. Before the program started, a ribbon-cutting ceremony was held for the soft inauguration of the UPOU Multimedia Production Center. The event was also attended by UP Vice President for Development, Dr. Elvira A. Zamora, UP Vice President for Public Affairs, Dr. Elena E. Pernia, Atty. Gaby Concepcion, UPOU officials, faculty, and staff.#UPOpenUniversity #salamatpdlc ... See MoreSee Less

The UP Open University (UPOU) Office of the Vice C

The UPOU Faculty of Education is looking for two (

In celebration of the 25th MPM Anniversary, the MP

UP Open University (UPOU) wishes everyone a warm a

The UP Open University (UPOU) holds a hybrid Oath-

IN PHOTOS: The UP Open University (UPOU) held an i

The UPOU Office of the Vice Chancellor for Academic Affairs (OVCAA) is looking for a Project Staff.

The UPOU FEd is looking for two (2) Project Staff.

Interested and qualified applicants may submit their application on or before 11 January 2023 at the Faculty of Education, TLH Building, UPOU Headquarters, Los Baños, Laguna or email at [email protected]

In celebration of the 25th MPM Anniversary, the MPM will recognize three (3) alumni achievers.