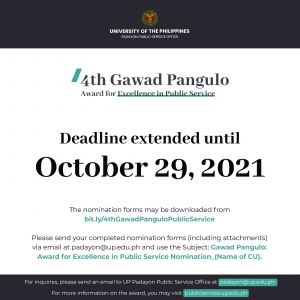 The UP Padayon Public Service Office will be accepting Nominations for the Fourth Gawad Pangulo: Award for Excellence in Public Service until 29 October 2021.
Colleges, departments, institutes, and other units in UP are enjoined to submit their nominations by accomplishing the nomination form with the appropriate documentary attachments. Public service initiatives that have been implemented from March 1, 2020 until July 31, 2021, with substantive outputs based on the stated objectives and outcomes, may be nominated. The nomination package, consisting of the award guidelines, selection criteria, and nomination form, may be downloaded at bit.ly/4thGawadPanguloPublicService.
Nominations must be certified by the CU Member of the System Committee on Public Service Monitoring and Reporting (https://publicservice.up.edu.ph/…/system-committee-psmr/), endorsed by the Chancellor, and sent in PDF format to [email protected] with the subject: Gawad Pangulo: Award for Excellence in Public Service Nomination_.
For inquiries, please contact the Gawad Pangulo Secretariat via email at [email protected]. For updates, please visit us at https://www.facebook.com/UPPublicService and https://twitter.com/UPPublicService.

There has been a problem with your Instagram Feed.
AvatarUP Open University@UPOpenU·
12 Nov

The University of the Philippines Open University (UPOU) has swept all three Prizes of Excellence awarded by the Norway-based International Council for Open and Distance Education (ICDE) this year.
https://www.goodnewspilipinas.com/up-open-university-sweeps-international-prizes-of-excellence-in-norway/